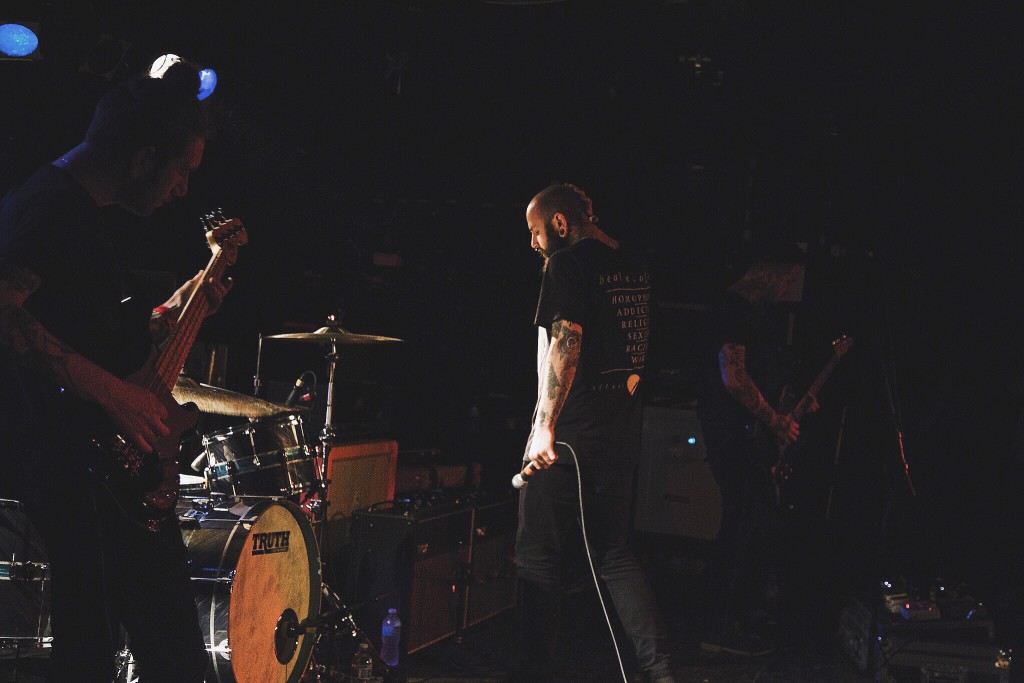 Last week, Andrew and I headed to El Co for the Fourth “Keeping Warm In A Cold World” tour, a West coast benefit series put on by Orange County hardcore band Stick To Your Guns. This year’s spotlight organization was The Wildlife Defence League, a Canadian organization dedicated to protecting wildlife from trophy and big game hunters.

Local hardcore bands Singled Out and Motion opened up the night, but unfortunately I couldn’t get there in time. Keep an eye out for more news from these bands, as we’ll be keeping a closer eye!

I was especially excited to see To The Wind. This local band has been taking off on the national scene, signing to Pure Noise and dropping a major release earlier this year titled Block Out The Sun & Sleep. Following the Hawks win earlier in the day, several of the members were sporting team jerseys while doling out their hardcore sound. Frontman Tanner Murphy led the chaos with a hoarse roar, allowing bassist Anthony (great name) “Tron” Laur and guitarist Ryan Murphy to tag in for a truly mammoth vocal section. Drummer Cory Lamb kept the pace up, making for an outstanding performance received well by a welcoming Seattle crowd.

Trial followed up, the Seattle veterans as informed and charged as they were energetic. The political, straightedge hardcore from such an experienced and respected band pushed the crowd into a frenzy, making bold inspiring statements for people to think for themselves and examine society as it is. Vocalist Greg Bennick led this furious band through a powerhouse set of songs that left the pit breathless.

Alpine, California’s Being As An Ocean followed up, the third performance in Seattle this year for the world’s sixth hardest touring band. Notably missing clean vocalist/guitarist Michael McGough, the band played as a quartet with frontman Joel Quartuccio leading, bassist Ralph Sica, drummer Connor Denis, and lead guitarist Tyler Ross taking up clean vocal duties. While the band delivered passionate heartbreakers with their traditional fire, McGough’s absence dealt Ross a heavy task of triple duty. The band performed admirably nonetheless, most notably engaged when Quartuccio dove into the crowd to pass the mic around and mosh with the band’s most faithful fans.

Stick To Your Guns closed out the night, blasting high-octane hardcore rock in opener “Nobody”. Frontman Jesse Barnett dealt out his fiery range of vocals as Chris Rawson and Josh James pounded out the band’s quick-fingered guitar parts. Rhythm section members Andrew Rose on bass and George Schmitz on the kit kept the pace fast and furious. After the searing 2012 record Diamond experienced runaway success with hardcore fans, 2015 is going to be even bigger with February Sumerian release Disobedient. All in all, a killer night of hardcore and post hardcore!