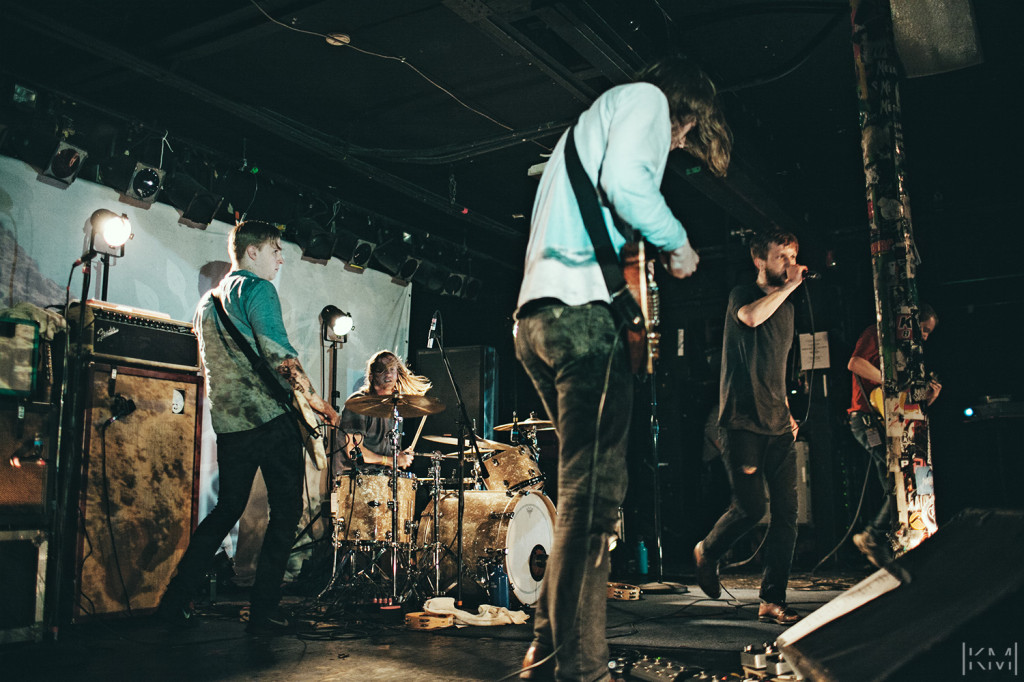 On April 1st, Michigan’s La Dispute led their headlining tour through Seattle for a sold out show at El Corazon. With Baltimore band Pianos Become The Teeth and Seattle’s own duet Mansions as support, the key venue was packed to the brim.

Now pushing new album ‘Rooms Of The House’, the Michigan post-hardcore-ish quintet has hit the ground running after the silence following 2011’s monstrous record ‘Wildlife’. Released March 18th on La Dispute’s own label Better Living and produced by studio wizard Will Yip, ‘Rooms Of The House’ has given La Dispute the perfect opportunity to tour with their longtime friends in Pianos Become The Teeth.

Before the 7PM doors, La Dispute also filmed an intimate show in town for the A.V. Club in a new video series the site is working on called ‘Pioneering’. Keep an eye out for the performance video, and read more about the series on the A.V. Club website.

First up was local band Mansions, a charming duet in Christopher Browder and Robin Dove, backed by a gifted touring drummer. The band’s latest record ‘Doom Loop’ dropped last year, and was the focal point of the band’s energetic set. Browder’s bold vocals and impassioned strummings were charged by Dove’s driving bass lines, present especially in set favorites Two Suits and The Economist. The chemistry present in Mansions is delightful, and allows the band to deliver the kind of lovely indie-rock that pleasantly borders punk. Stream ‘Doom Loop’ on Spotify now!

Baltimore quintet Pianos Become The Teeth was up next, a band that intricately ties shoegazer and rock with brutal vocals reminiscent at times of Bonnette brothers-era As Cities Burn. Vocalist and frontman Kyle Durfey delivered a hair-raising performance, balancing his broken howls atop the band’s expansive soundscapes. Guitarists Chad McDonald and Mike York wove dense washes of reverb into powerful rock jams, thoughtfully framed by bassist Zac Sewell and drummer David Haik. The band tore through a handful of favorites, including Liquid Courage and I’ll Get By, long and deeply involved songs transitioning seamlessly through incredible moods and emotions.

Headliners La Dispute took the stage a good while after Pianos, backed by a huge print of the band’s famous flower logo and colored by slide projector images to create a warm, glowing environment. Frontman Jordan Dreyer led the band through nearly 20 of the band’s heartbreaking songs, kicking off with new album openers Hudsonville MI 1956 and First Reactions After Falling Through The Ice before breaking into older material. Songs like The Most Beautiful Bitter Fruit and St. Paul Missionary Baptist Church Blues represented ‘Wildlife’, while Andria and Said The King To The River represented 2008 breakout release ‘Somewhere At The Bottom Of The River Between Vega And Altair’.

Memorizing La Dispute lyrics is almost as much a labor of love as inking them, and the crowd happily belted the screaming, speaking, and singing hybrid that Dreyer has very much perfected. Guitarists Kevin Whittemore and Chad Sterenberg beautifully delivered the complex guitar parts on all three records, allowing bassist Adam Vass and drummer Brad Vander Lugt to plumb and navigate the emotional depths of every song.

After a few bouts of violent shoving, Dreyer gave his trademark speech on respect and care in the pit, and halted and ultimately scrapped an entire song to help an injured fan out of the front row. The rescue was met with incredible positivity, the crowd clapping and cheering as the young frontman helped the fan to safety offstage.

The band plowed on with thick waves of intense hardcore, interspersed with curiously beautiful moments of quiet and reflection. To close off the night, the band erupted in a two-song encore of a Broken Jar and the accidental murder pictured in King Park, arguably the band’s most crushing track to date. King Park pushed the pit into a ferocious (but relatively careful) frenzy, every syllable reaching deafening levels. The fervor and crowd volume increased dramatically as the song bounded toward its bloodcurdling last verse: ‘Can I still get into heaven if I kill myself?’.

In short, La Dispute is utterly overwhelming, a devastating take on post-hardcore. With talent like Pianos Become The Teeth and Mansions, La Dispute has delivered an unforgettable experience made extra special knowing it will be Kevin Whittemore’s last Seattle show with the band. Stream ‘Rooms Of The House’ on Spotify now.