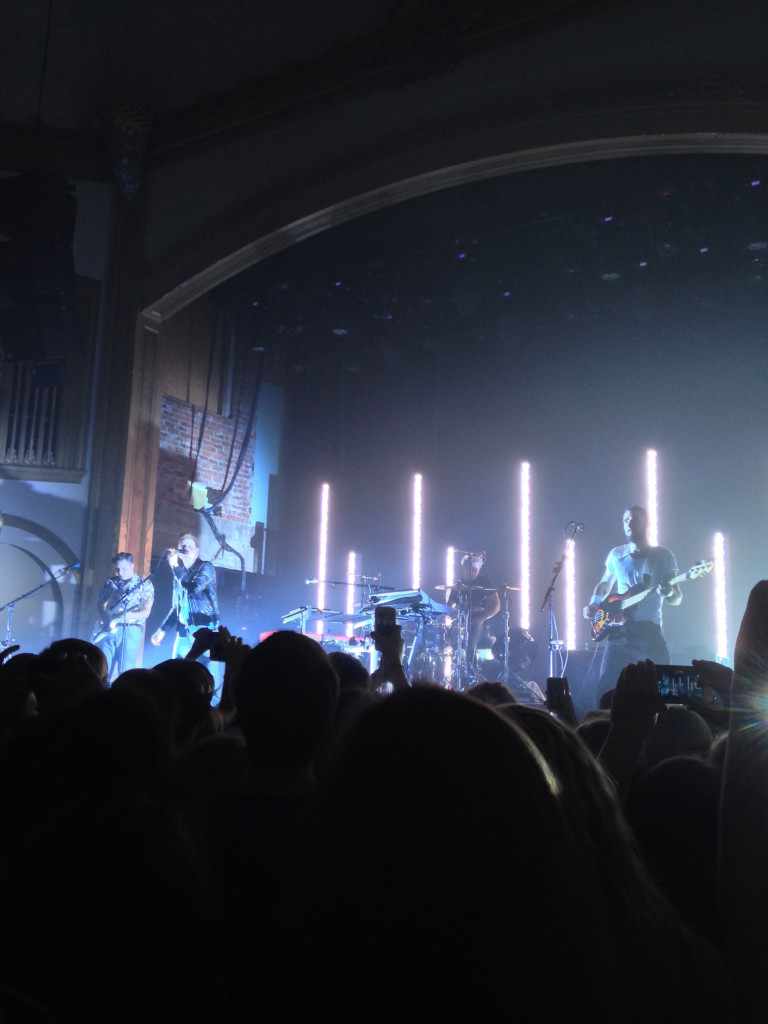 I don’t dance. Not even in the “sway with the music” sense. When I made it to Seattle’s hallowed Neptune Theater for Peace, St. Lucia, and Two Door Cinema Club, I had less than no idea what I was getting into.

This was my first time at the Neptune, though I’d heard about it and walked past its dazzling entryway hundreds of times as a student. The line for the show went around the block, and was totally sold out by the time I got in just before 9.

I was anxious about such a late show, but I sucked it up and made my way to the back of the “mosh” pit.  I contented myself with a spot near the back and prepared myself for a long night of standing. I spent a fair amount of time just looking around the historic facility. I can’t believe it’s almost 100 years old. It’s certainly full of character.

UK quartet Peace was the first to take the stage. At only three years old under this moniker, the relatively young band filled the stage with the swagger and confidence of performers many years their senior. Though the musicians had a few tiny hiccups during the set, the musical prowess of the Worcester band shone through raw, aggressive fretwork and a devil-may-care stage presence. Frontman Harry “Harrison” Koisser and lead guitarist Douglas Castle traded fuzzrocious riffs while drummer Dom Boyce and bassist Samuel Koisser pieced together the tight rhythms and angelic oohs that completed the dynamic vocal range of the lead Koisser.

I’m happy to see the return of Fender offset guitars to the mainstream, and the Koisser brothers’ Mustang and righty-as-lefty Mustang bass were a treat for the eyes and the ears. The guitarists expertly coaxed their amps into feedback often to bring color to the otherwise straightforward sonic palette, and indeed ended the set with a massive wave of swirling feedback.

The band’s sound, an entirely danceable and blaring brand of indie rock, made for a magnetic show that was both energetic and enjoyable. The set included songs old and new, like Lovesick and laidback lounger Float Forever. It’s apparent that this band is well on its way to the big leagues, and I look forward to seeing where this young band and their new record ‘In Love’ will go.

Next up was electro-indie pop artist St. Lucia. Masterminded by Brooklyn’s Jean-Philip Grobler and supported by a touring band, St. Lucia’s setup included a full keys-and-rhythm section, a pair of synths that Grobler and touring singer Patricia Beranek handled, a bassist/rhythm guitarist, and a drummer with an assortment of acoustic and electric drums.

St. Lucia seemed to get off to a rocky start vocally. The rough transitions to and from chest voice to skyscraping falsetto caused the vocalists to struggle with matching harmonies in the early part of the set. As the band warmed up, the vocals (and the rest of the band) tightened up, and St. Lucia finished quite strong.

Once the vocals lined up more, I started to enjoy the music. The band was great at engaging the audience, and with plenty of dancing onstage, there was never a dull moment visually.

Where Peace excelled in fretwork and riffage, St. Lucia’s brightest moments were the densely layered synths and loops. Though there were often two guitars being played (both offset Fenders: a beautiful burst Jaguar for Grobler and a glittering gold Jazzmaster for the rhythm guitarist), it’s apparent that the group’s primary sound is built on synth work and carefully crafted dance beats. St. Lucia ended on a roaring high, and left the stage to enthusiastic applause for Two Door to set up.

As headliner of the tour, Two Door Cinema Club had the most in the way of stage production, featuring drum risers, complex stage lighting, and plenty of room for each of the four members to move around. I watched the band’s roadies prep up a series of Jazz and Mustang basses as well as a trio of beautiful Gretsch electrics for frontman Alex Trimble, cementing the Fender lineup for the night.

Two Door came onstage to a raucous crowd, and immediately dove into their hourlong set. Bassist Kevin Baird and touring/recording (how is that not just a part of the band?) drummer Benjamin Thompson were an unstoppable dance beat machine, shelling out syncopated rhythm after rhythm with mesmerizing consistency and energy. This made room for frontman Trimble and lead guitarist Sam Halliday to exchange riffs and hooks, bringing the night firmly back toward guitar-driven performance. Trimble wasn’t a stranger to the keyboard though, swapping in and out of a full Nord setup throughout the night.

Between the smoky, dense air and the ornate stylings of the Neptune theater, Two Door’s lighting effects were spectacular. The crowd was driven to frenzied dancing and quite friendly moshing during most songs, the endless (literally, endless) strobing effects adding to the intensity of Two Door’s stage presence. Being the old man that I apparently am, I was fascinated by the lighting, then speechless, and finally, quite tired. It was a visual assault in keeping with the age old “too much of a good thing” thought. The lights were perfectly synced to the songs (very cool), but became a bit of a formula: colored filters frame the intros, frantic strobe lighting in the choruses, and a total blackout at the end of almost every song.

All told, it was a solid show. Two Door closed with a three-song encore, with a powerful rendition of What You Know to finish off. By the time the crowd filed out onto 45th again, it was close to 12:30 in the morning.

It seems to me that every other new band is a contender in the indie rock scene, blending club-friendly four-on-the-floors with rock standards. I can’t even begin to number the one hit wonders in this style that have “made it” with a trendy new ad campaign for a hybrid or tablet or one of those fancy new vodkas, and more or less fell into obscurity right after. It takes a rare artist to shine in a crowded genre, and all three bands, at three very different points in their careers, made for an excellent (if exhausting) night of music. I just hope they’ll forgive the one guy standing literally stalk still in the middle of the pit.