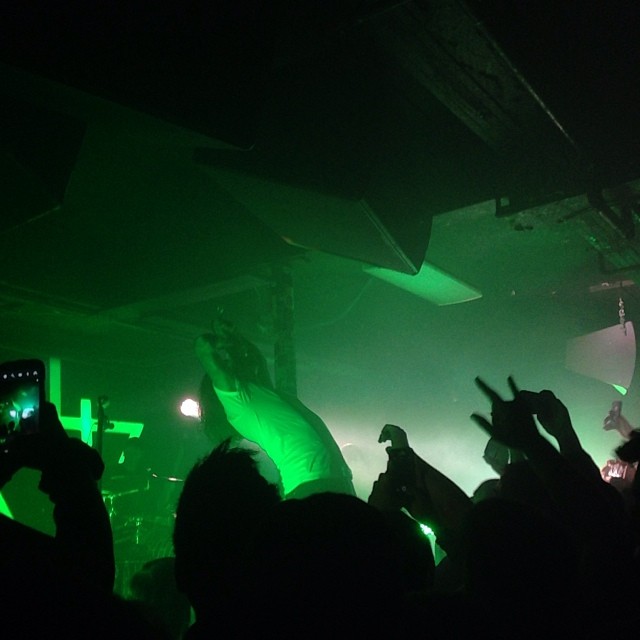 A funny thing happened last week: I started liking shows again. I’m not sure how it happened, nor am I sure when or how it stopped happening, but I got to El Corazon Tuesday night determined to enjoy myself.

Well, it wasn’t hard. The 8:18 Tour sold out the historic Seattle venue, and for good reason. The knockout lineup consisted of Pennsylvania band Texas In July (why Texas??), LA acts Volumes and The Ghost Inside, and of course, Ohio headliner The Devil Wears Prada.

It was also my first chance to tag-team with RCA photographer Karen Ready, who covered the night like a champ and gifted us with the gems below!

I often get all the ‘Texas…’ bands confused, but Texas In July was a strong opening for the night. The young quintet played a handful of songs favoring their 2012 self-titled, with replacement vocalist JT Cavey at the helm. There doesn’t seem to be clarity regarding the status of original frontman Alex Good, but they’re in great hands with the talented new vocalist. Much of the band’s newer sound reminds me of August Burns Red, with searing fretwork and traded riffing between guitarists, hardcore/punk influenced rhythmic changes out of drummer Adam Gray, and dry, pleasingly hoarse roaring. Back at the merch table, I congratulated Cavey on a fantastic performance, and he thanked me graciously. Nice dude. Texas In July was a first rate, energetic dive into an awesome night.

Volumes was up next, a band whose name I’ve seen all over but hadn’t actually heard before. I’ve always wondered what it would be like to have two dedicated screamers, and with Volumes I can stop wondering. The band, led by co-frontmen Gus Farias and Michael Barr, set off a blistering chugfest with both vocalists hyping the crowd and dominating the stage. Volumes’ instrumental lineup was a slight departure from the norm, with lone guitarist and producer Diego Farias handling both rhythm and lead parts while drummer Nick Ursich and bassist Raad Soudani and his MASSIVE Bongo bass held the low end. It was difficult at times to distinguish Farias and Barr’s similarly gainy screams, but the duo did a great job of engaging and energizing the crowd. This Los Angeles band is a fresh take on metalcore, with a followup to 2011’s ‘Via’ coming out soon. Check out their monstrous new single, titled Vahle, below:

By the time Volumes’ teardown began, I’d gone the long way around the balcony to where the crowd concentration was significantly less… concentrated. I don’t like to give away my showgoing secrets, but to get to the front, you enter from the side, and as The Ghost Inside came on I wrestled with whether I should enter the pit before or after their set.

I decided to stay well back during The Ghost Inside, which turned out to be the most physical the crowd got thus far in the night. This band has been around in some form for nearly a decade, and though I’m not entirely familiar with their material, all I’ve heard in passing has been good. The Californian 5-piece slammed through an energetic set, welcoming stage divers and allowing audience members to contribute lines in frontman Jonathan Vigil’s mic. The song list included hits like The Great Unknown, This Is What I Know About Sacrifice, and Vigil’s tribute to his late brother, a moving piece titled White Light. The songs I recognized were from 2012’s ‘Get What You Give’, a record that I now regret not hearing more of before the show. Although I spent at least 20% of the performance drooling at lead guitarist Aaron Brooks’ Les Paul Supreme, I am definitely looking forward to seeing this California heavyweight again soon.

Once The Ghost Inside cleared the stage, I entered the left side of the pit and waited patiently to move up. The Devil Wears Prada had the most setup work, so I had time to creep up to about 5′ from the stage while the crew prepped the arrays of stage lighting and fog machines. By the time the five members (and touring keyboardist) of The Devil Wears Prada stormed the stage, it was about 9:45, and the venue had been filled with a thick layer of fog.

The huge Dead Throne logo that had overshadowed the opening acts was now lit an eerie green, and with the fog and a moody audio intro, the stage was perfect for Gloom, the opening song. In keeping with the creepy vibes, the band followed up with Escape and Anatomy, both from the seminal ‘Zombie’ EP. The song list was heavy with ‘8:18’ tracks (it IS the 8:18 tour, after all), but had a few older favorites like Assistant To The Regional Manager and Born To Lose. Frontman Mike Hranica constantly worked the stage, and whether he was pushing his incredible screaming range, taking a breather during the sung choruses, or strapping on a third guitar for select pieces, he was a force to be reckoned with. Backed by lead guitarist Chris Rubey and singing rhythm guitarist Jeremy DePoyster, Hranica dragged the crowd through 40 minutes of bone crushing metalcore.

I was impressed by how tightly they played together, especially without sacrificing intensity. Though some parts were modified for live application (including DePoyster’s sung parts, amended to prevent vocal exhaustion or cracking), the five core members of this band were flawless performers and engaged the crowd without a hitch. Bassist Andy Trick and drummer Daniel Williams generously doled out the low end while touring/studio keys player Jonathan Gerring layered on the band’s menacing synth backdrops.

The crowd was stirred into a riotous frenzy throughout the night with heavy hitters, but my favorite moments were the intricate dynamic ranges of the Linkin Park-esque Care More and the gut-punching thrill ride that is Kansas. The main set ended with new single First Sight and fan favorite Danger: Wildman. Once Hranica bellowed the massive first lyric, ‘I know a ghost!’, the crowd broke into all-out chaos. I almost lost my glasses.

After the blackout following Danger: Wildman, the band exited the stage with an immediate call for an encore, returning moments later to close out the night with towering renditions of Dead Throne and Mammoth. There is no question about it, The Devil Wears Prada delivers an unforgettable performance. I would happily brave the pit to see them again, but that’s more than enough out of me for now. I was super honored to work this show with RCA photographer Karen Ready, so check out the shots she took!